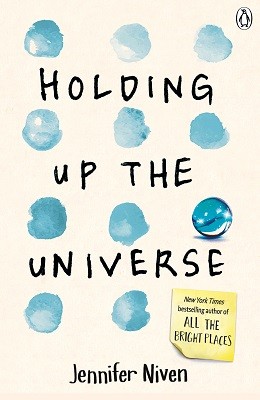 Holding Up the Universe tells the story of two teenagers called Libby and Jack. Libby, a girl whose struggle with weight led to her becoming trapped in her house, finds that since that event people have struggled to forget that she was once “America’s Fattest Teen”. Jack, on the other hand, has been hiding his prosopagnosia (face blindness) from his friends and family. As the pair get to know each other, they learn that it’s what a person is like on the inside that counts.

Like All the Bright Places, Holding Up the Universe covers themes that aren’t often mentioned in literature. Libby and Jack have quite contrasting backgrounds but what brings them together is that because of the problems that they have faced, they see each other for who they really are, which is so important. The book also demonstrates that you don’t truly know someone until you meet them and get to know them.

I found that the two relative points of views of Jack and Libby were very similar – I had to make sure I remembered whose point of view it was throughout each chapter, as the voices were easy to mix up.

Overall, I think I learned a lot from this book as the relationship between the two showed that what others think of you is irrelevant – as long as you are happy.