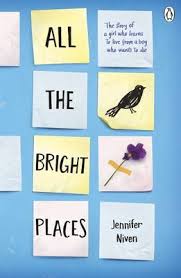 When Violet and Finch meet up on the ledge of the school bell tower, it is unclear who talked down whom. Violet is a popular girl, still trying to come to terms with her sisters’ death, while Finch is the opposite, called a freak by his peers and still trying to find out who he really is. As they wander Indiana as part of their school project, they find they can be themselves together and that there is much more to Finch than Violet originally thought…

This book is written with alternating POVs – we start off with Finch and then we switch to Violet and they take turns from then on. The chapters were so different that you can always tell whose version of events it was. The main characters are  quite developed, however other characters like Violet and Finch’s friends were not described in detail.

On the front of the book it is compared to The Fault in Our Stars – the two certainly have a similar writing style and I think that if you like All the Bright Places you should have a go at TFIOS and vice versa.

All the Bright Places highlights some important issues about mental health that really need to be discussed among teens and young people more often. Books like this raise awareness about this and the more popular the book becomes the more people who will learn more about mental health.

Apparently All the Bright Places is to be made into a film and I’m really interested to see they adapt it and how much of the original story they are going to keep.

One last thing – if you didn’t notice the new widget in the sidebar I have now got a Facebook page! Here you can keep up with my latest blog posts, info on new book releases and film adaptions. Next up: More Than This by Patrick Ness. This is such a thought-provoking book and the review will be up in about a weeks’ time.