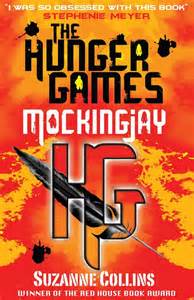 The Girl on Fire has survived two Hunger Games, which she will never be able to forget.  After being pulled out of the arena by the rebels, she is starting to realize that things will never be the same again – Katniss is now the face of the rebellion, inspiring the rebels in her new position as The Mockingjay.  Peeta is now in the capitol and, under the influence of President Snow, is trying to persuade the rebels to order a ceasefire. Katniss, however, will do whatever it takes to destroy the capitol. Will the Mockingjay flourish? Will Panem turn to her in their time of need?

Katniss wasn’t as strong as she was in the other Hunger Games, which meant that she spent quite a lot of time in the hospital. I know she has been through a lot, and she is finding it hard to cope, but I would have liked to have seen a bit more of her confident personality she showed in The Hunger Games.  Nevertheless, it was still a fast-paced read. I think this is a fitting end to the trilogy and I had hoped it would end the way it did.

I am really looking forward to seeing the film, so I can compare and see which I prefer. Which is your favourite?

Q: Has anyone began to watch/watched Looking for Alaska yet? What do you think? Hi everyone! 😊 Once again, the university admissions process has got in the way of me reading and posting, but now I’ve got a break until I might need to do anything else application-related! So far I think the Looking for Alaska tv series is a really accurate portrayal of the book - the setting is just like I imagined! I’m currently reading Six of Crows and I’m looking forward to getting into it! #bookstgram #yafiction #booksforteens #johngreen #lookingforalaska #booklover #bookshelf
Q: What’s your current non-fiction read? Hello everyone! I’m currently reading The History of Capitalism, I really recommend it as it is well explained with lots of good examples! I finally finished War Storm do there will be a review going up soon! I’m currently prepping for uni applications so I’ve got a lot on 😬 #books #bookstagram #fiction #currentlyreading #fictionforteens
Top tip: check out the WHSmith clearance section for cheap books 📚 I got Genuine Fraud for only £2 - I couldn’t say no! There are some slightly strange books in the clearance section, but in the past I’ve found some good ones! Has anyone read this? If so, let me know in the comments! I hope you’re all having a good day! #genuinefraud #yafiction #books #bookstagram
Q: What format do you read your books in? Physical? Audiobook? Ebook? Hello everyone 😊 I hope everyone is enjoying summer! I mainly read physical books, but sometimes I’ll borrow an e-book from my library. I’m going surfing tomorrow and I can’t wait! 🏄🏼‍♀️ #booklover #yafiction #fictionforteens #bibliophile #bookworm #booknerd #bookstagram #bookblogger #instabooks #books #amreading #reading #bookstagrammer #booklove #bookobsessed #booktography
Q: Hello everyone 😊 After quite a long hiatus, I’m back! I’ve been pretty inactive lately, which has been due to things like university trips, Gold DofE and end of term activities, which have been quite mentally and physically tiring! Now that I’m into the summer, I’m looking forward to enjoying books outside and taking some sunny photos! On Sunday I went to see the new Spider-Man film - I loved it, and would really recommend it! I’m looking forward to when the Knife of Never Letting Go is released in cinemas! #Booklover #yafiction #fictionforteens #bibliophile #bookworm #booknerd #bookstagram #bookblogger #instabooks #books #amreading #reading #bookstagrammer #booklove #bookobsessed #booktography
Q: What are you currently reading? Hello everyone 😊 I’m sorry that I’ve been away for a bit, I’ve had exams and DofE expeditions, as well as university applications 😬 I can’t wait for the summer, only two weeks left! I’m not reading anything at the moment, I’ve got a book waiting for me at the library! #Booklover #yafiction #fictionforteens #bibliophile #bookworm #booknerd #bookstagram #bookblogger #instabooks #books #amreading #reading #bookstagrammer #booklove #bookobsessed #booktography