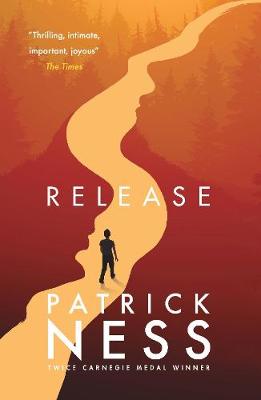 Release is one day in the life of seventeen-year-old Adam, a gay teen with a homophobic preacher father from Washington. It’s a big day for him, with heartbreak, love, secrets being told, relationships breaking down; Adam will learn a lot from today…

As with many of Patrick Ness’s books, I found it hard to summarise the book without giving too much away. The book has references to Judy Blume’s Forever and Mrs. Dalloway, however as I have read neither of them, I feel like I can’t comment on how much they added to the story.

Dispersed within the main story was an unusual second story with a fawn and a Queen. It had a different writing style, similar to that in much older books. This parallel story was mentioned briefly in the main story, but I didn’t quite understand it’s significance. Somehow it had a deeper metaphorical meaning, however it wasn’t really clear enough for me.

I felt like the supporting characters, aside from the main characters, weren’t explored enough, however, this did not take away from the fact that it was a heartwarming book about self-discovery, young love, and making good choices.

Another thing worth mentioning is that Release is definitely one for the older teens out there, due to some inappropriate content.

One thought on “Release by Patrick Ness – book review”