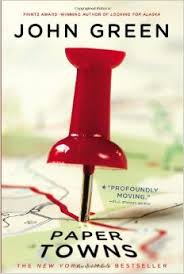 Quentin Jacobsen (or ‘Q’ as he is known to his friends) has always been a secret admirer of Margo Roth Spiegelman, his next door neighbour, since he was a child. When Margo arrives at Q’s window asking  to borrow his car in the middle of the night, they embark on a night of revenge as they target her unsuspecting disloyal friends and cheating boyfriend. The net day, Margo doesn’t turn up to school. Like the last time she ran away, Q believes that she has left a trail of clues, specifically for him to follow. He has to act quickly, because he may never see Margo again…

Out of the four John Green novels I have read, (all reviewed on this blog) I think that this is my favourite, Mainly because the characters seemed more realistic and likable instead of having a unique interest to set them apart, like anagrams or last words, to make their personality more interesting. Another thing I liked was the element of mystery  – you are left guessing what a ‘paper town’ could mean. The humour in the dialogue was distributed evenly throughout the book and added another side to the story.

The ending wasn’t what I expected and I suppose there could have been a better ending to the story, but nevertheless I really enjoyed it and I will definitely be heading to cinemas in August to see the film adaption.

What is your favourite John Green book? leave a comment!