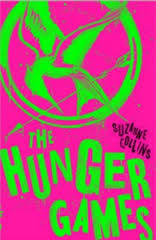 The Hunger Games tells the story of sixteen year-old protagonist Katniss Everdeen. The story is set in the futuristic Panem, a land which has risen from the destroyed North America. There are 12 districts, the 13th of which had been destroyed after a rebellion against the capitol by the districts. As a harsh reminder not to step out of line, the districts have to present two tributes, a boy and a girl, aged between the ages of 12 and 18, to compete in the Hunger Games. The Hunger Games are a gory fight to the death, so only one tribute can survive. Will it be Katniss? Will the odds be in her favour?

I’ve heard a lot about The Hunger Games, so I decided to try it. Many of my friends have seen the film and read the book and have been encouraging me to read it for a long time. As I write, the latest film, Mockingjay, has been released, so I also wanted to read all three books in time to see it in the cinema.

The Hunger Games engages the reader from the first paragraph to the last page: almost every chapter ends in a cliff hanger so I felt as if I had to read on.  I would recommend it to anyone who doesn’t mind a bit of gore (It’s not too graphic, however). The thing that makes this book special is the presence of a strong female protagonist, which is very inspiring for the reader.

Overall, I think this book should definitely be on your reading list. This is one book that will definitely stay in my mind for a long time. Catching fire, here I come!

3 thoughts on “The Hunger Games by Suzanne Collins – Book Review”